Welcome to My House 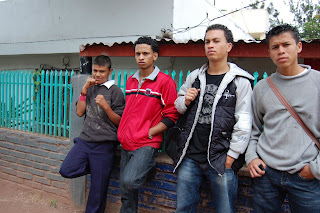 (From Left to Right: Junior, Juan Carlos, Leandro and Paulo)
What began as a simple inquiry as to what some of the boxers do before training, quickly turned into a full fledged tour of their neighborhood and homes. It was nice to know these guys in an environment outside of the gym, but it was a reality check as to how good I've been living here, despite my room being increasingly infested with cockroaches and costing 140 Lempiras ($7.50 USD) a night. I used to tell them that my old hotel had no water and that I washed myself with a bucket, thinking they would be surprised that I chose to live that way, but after seeing some of their homes, it probably came off like I was boasting seeing how they would be fortunate to have the "tila" full of water that I had every night. 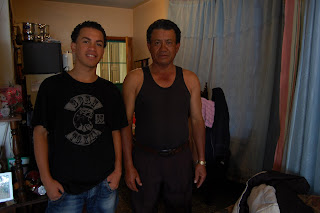 (Leandro Jr and Leandro Sr)
My first stop was to Leandro's house, where I met his father who named his son after himself. I didn't get to see much of the house, but the pictures on the wall told me that his mother had passed and that he has an older brother and pregnant sister living elsewhere in the same neighborhood. Leandro tells me he wants to continue onto the university because that's what his mother would have wanted if she was still here, but he can't afford it. His father works to pay the rent, sister works to feed the family. There is little left for luxuries like education. When I ask him what he wants to study, he says he doesn't know. He says it doesn't matter. Just as long as he's studying something. 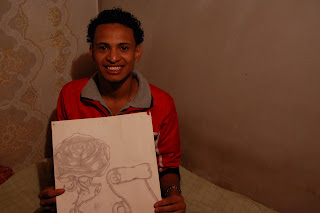 (Juan Carlos showing me his latest piece of work)
Quite the contrary is Juan Carlos, whom you all are acquainted with from the previous post. For him, he says he only wants to work; anything that will bring in money but according to him, all the jobs run through the training session and he is still unwilling to give up boxing. In the mornings he helps his family to earn his breakfast. Lunch he hasn't known for years. The rest of the time he draws, quite skillfully too. I ask him if he ever considered applying to art school but he says that is even more expensive than the normal university. He'd like to though. Maybe he's more like Leandro than he thought. 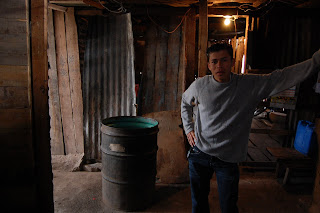 (Paulo by the doorway and water supply)
Finally I was taken to the house of Paulo, whose living conditions surprised me the most since he always came to the gym so well-kept, but then it is foolish of me to think that one's physical appearance has to automatically correlate with their living situation. Walking up the unfinished wooden steps, the first thing I noticed was that both the floor and the majority of the walls were concrete. After he invited me to sit, immediately my elbows were dampened and felt that the table cloth was soaking wet. It was then I remembered it was raining that morning. I looked up to see that the roof consisted of various scrapmetal, hardly enough to endure even the infrequent rain during this time of year. It was difficult for me to imagine what it was like during the rainy season. With almost a shameful urgency, he quickly told me that soon they'd be installing more dividing walls so that the kitchen and his shared bedroom wouldn't be just an open space as it is now. He told me this with almost a hint of embarassment, as if he had to apologize for growing up in poverty. 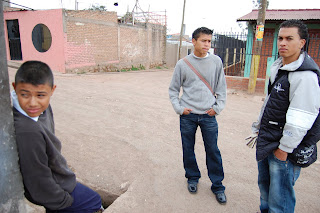 After we finished I invited them out to eat something, anything for allowing my intrusion into their lives. They chose Chinese food, maybe for my sake, or maybe they just really like fried rice. Juan Carlos ate with such ferocity that it seemed like he hadn't eaten lunch in years, but then I remembered, he hadn't. The check came out to 146 Lempiras, about $8 USD to fill the four of us with leftovers to spare, which the guys decided to give to the coach. Perhaps it was my appeared ease in paying for what here is a considerably hefty bill, but Paulo later asked me if I could lend him money to buy school books because all his family's income went to food. After visiting his home and noticing how he always carries a satchel full of schoolwork, there was no way I couldn't believe him. I begrudgingly decided that I couldn't lend him the money, not because of the amount, but because it was ultimately unfair to the rest of the guys. I couldn't lend them all money. That I couldn't afford. But that doesn't mean I didn't want to.

I wanted to give Paulo a library where just alphabetizing the genres would get tiring, large enough you'd forget what you were researching because each book would spark a new thought. I wanted to provide Leandro the opportunity to have so many choices in what to study that he'd have the common symptons of a US college student stressing in "not knowing what to study" but ultimately end up being fine, so really, all those problems he frantically complained about paled in comparison to his reality before he went to school. He would always chuckle at how silly his worries once were. I wanted to buy Juan Carlos an infinite canvas and all the art supplies he would ever need to sketch away his hunger, paint over his pain, and create a work of art to remind the world that their lives are worth just as much as anyone else's; that whatever you're going through, someone else always has it harder so be grateful for what you have. I wanted to bear some of the struggle, help crack open the window of opportunity a little wider and let a little more hope shine through, but I couldn't. All I could do was buy them some damn Chinese food. 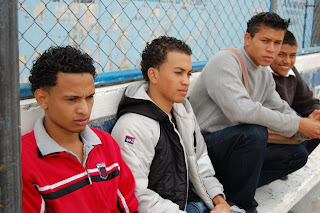 Posted by Wandering Pugilist at 6:13 AM

Thas what I'm talkin bout. See those are great photos. Make noise loud enough for ppl to hear, all the way from Honduras. Do what you are supposed.

hey man i just wanted to say that your blog is amazing and i'm really glad you're still posting stuff - its fascinating (and saddening) to read, i just wanted to let you know i enjoy reading it a lot.
-nate

nah man everything in seattle kind of just keeps on rolling like always. i've cut back heavily on the project, and work an hour or two here and there when i get the chance, but thats about it. amy did a 'reading of the names' out on the hub lawn with an army of volunteers recently, which took about 10 hours i think... each person read names of victims for about 15 minutes, but when you're actually making a complete sentence out of each victim it takes a lot longer, and really impresses on you how many names are on that list.

in general though the project is getting pretty close to completion - i think we've one state left to go for searching, and 4 or 5 for data entry (part of why i haven't been working so much, truth be told).

also my blog is kind of a piece of mind-vomit... read it if you want, but it hardly approaches the quality of a real blog.

are you still using your uw email account? can i send you emails there?