*I haven't posted much lately because I've been focusing my writing on recounting the tales of my journey. I meant to write this story when I first met this boxer, but I did briefly reference his neighborhood previously in the blog here. The following is a rough draft excerpt of a book I plan to write. Any feedback is appreciated. 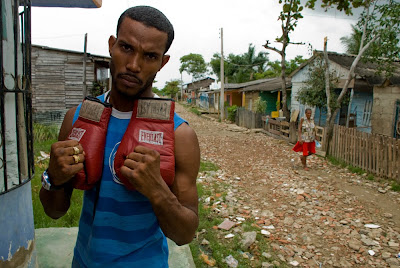 (Outside the home of Henry “El Mamba” Aurad - Cartagena, Colombia.)
When visitors enter my apartment for the first time, they usually ask about this picture that hangs on the wall. They wonder about the story behind the image, who the fighter is, where he comes from and where he is now. Most people guess "Africa", probably due to the rural village-like background, the fighter’s skin complexion, and the fact that most people don’t know that there are black people in Latin America. The photo was taken in Cartagena, Colombia - traditionally the city of Colombia most populated by tourists.

Cartagena is a fisherman’s port, frequented by foreign maritime merchants for centuries, but with its location primed next to the tropical beaches of the Caribbean, it seemed only natural that gaggles of tourists would come and make it another playground for the world’s economically privileged. But when you mention “Colombia” as a travel destination, the notorious cocaine kingpin Pablo Escobar, or the infamous kidnappings by the terrorist FARC militia, are the first things that come to mind. Bottom line is: you don’t visit Colombia.

In recent years the rest of Colombia has become relatively safe to travel, but tourists have always stopped regularly to visit Cartagena, so much that Presdient Alvaro Uribe, and the presidents before him, made security in the city a high priority. One can see that from the noticeably increased visibility of military presence, and the fact that one of the President’s palaces resides in the city center. But the Cartagena's misconceived affluence overshadows the immense poverty that plagues the majority of its residents. In truth, it is one of the most impoverished cities of Colombia and sure enough, the city is rigidly divided between the haves and the have nots, or as locals would constantly describe to me as “Cartagena tiene dos caras” (Cartagena has two faces).

Perhaps the most troubling part of these very distinct barriers of class and race was that the socially marginalized neighborhoods juxtaposed themselves next to the luxurious city centers and guarded tourist communities. During my two months in Cartagena, my daily commute from the backpackers’ hostel to the boxing gym constantly reminded me of this rigid divide, as the hostel resided in the city's most affluent area, and the gym resided in a considerably poorer district; its fighters often living in even more impoverished conditions. As a legal caution, but more so as a form a courtesy, I had every boxer sign a consent form that included a disclosure of their home address. I remember when some Colombian friends stumbled upon these forms they'd ask me quizzically, “Why do all these forms have the names of dangerous neighborhoods?”

The particular neighborhood pictured above is “Barrio Olaya”, and the side in which this fighter resided was not even ventured by fellow boxers. Apparently he lived in the most dangerous part of the most dangerous neighborhood. His name was Henry Aurad, but everyone called him “El Mamba” - a ring name embroidered in green letters on the back of a white training tee that he wore each day. When people in the gym heard I was looking for boxers to interview, he approached me with a handshake and a hopeful smile. In all honesty, having already done a good round of interviews earlier, I wanted to be through for the day, but with his respectful patience and the realization that these interviews were just as much, maybe even more, of a time sacrifice to the boxers as they were for me, I couldn't possibly turn him away.

Henry spoke with such fluency and comfort that it was clear to me he had done interviews before. I learned later that he was one of Cartagena’s top prospects, despite his pro-debut loss. I was really looking more for the low-ranking common boxer that never had their story heard, but the thoughtful and intriguing answers Henry gave showed a level of class and intelligence I had not encountered before. It was apparent that Henry had struggled for his achievements, but it was the clarity of his explanation and the awareness of his surroundings that made it so interesting. For instance, I always ask the question, “What do you eat before a fight?” in hopes of showcasing the Spartan-like discipline a fighter must have to make weight for a bout and to highlight the gastronomic sacrifices made during training. Most times I would get a very typical nutritional catalog: rice, plantains, chicken, fruits and vegetables. But not this time.

Henry was the first to tell me that he sometimes did not have enough money to feed himself. He told me that despite being considered one of Colombia’s top prospects, athletes like him could very rarely afford a nutritiously-rich meal or "a Gatorade to restore the electrolytes lost during a training session". But it wasn’t as if Henry’s inability to afford a stable diet came from a lack of personal drive or motivation, (how could it when he participated in the most difficult sport in the world?), but rather because he had other mouths to feed, and sometimes, theirs came before his. In fact, Henry still is one of the hardest working persons I’ve met during all my travels.

A typical day for “El Mamba” begins with roadwork at 4:30 AM, the only hour where the oppressive Colombian humidity allows someone to run. By 7:00AM he arrives at his job as a carpenter and works until his 11:00 AM break. Traditionally, Colombians are given two hours for lunch, but Henry is given three. With his employers being quite supportive of his career in the ring, the extra hour allows adequate time for Henry to make the forty-five minute roundtrip commute to the gym and squeeze in two hours of training. After a quick shower and hurried scramble to the buses, Henry is left with a little less than 10 minutes to actually eat when he returns to work. At 8:00PM he finally returns home to his wife and child in a neighborhood commonly confused to be a rural African village. This was Henry’s daily routine. This was his life. 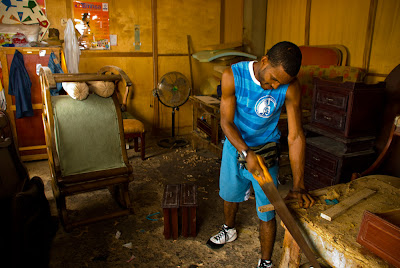 (“El Mamba” demonstrating his work. From Monday to Friday, Henry works 9 hours daily, earning a monthly wage of 500,000 Colombian pesos, or about $250.00 USD at the time this photo was taken.)
On top of his meager income, Henry is Afro-Colombian and like in most parts of the world, dark skin carries with it a social stigma. In addition to being economically poor, he is also snuffed by Colombia’s upperclasses for being black. For Henry, boxing is his way out. It represents the opportunity to provide some medium of change in his life, whether it is eventually reaching a level of superstardom, or merely being allowed to travel outside the country for a fight.

I asked Henry what he thought about Olaya, if he ever planned on moving to another neighborhood. Surprisingly to me, it took a moment for Henry to hesitatingly answer, “yes,” almost like a politician carefully choosing the words to publicly address his thoughts on abortion. Henry quickly followed his admittance of relocating with a declaration that he would never forget the “barrio”. There is always some level of pride in where someone comes from. People never forget the influence of neighbors, or the uplifting support of a community in the times of adversity. It is what made him.

Boxers are celebrities in their community. Regardless of their ranking in the broader context in the world of boxing, they are still regarded as superheroes. While walking with Henry through the streets of Olaya, bombardments of salutes, handshakes and friendly inquiries of upcoming matches appeared as normal routine. At one point we were followed by a group of school kids screaming, “El Mamba! El Mamba!” for nearly ten minutes. Henry had respect in his community. As a matter of fact, knowing him was probably one of the only reasons I was able to freely walk around carrying around a $1200 digital camera in my hands. But Henry wanted to move out of the neighborhood not necessarily for himself, but for his son. After the immediate validation for his beloved “Olaya” barrio, he gently explained to me that he wanted to give his son a better future than he his own, or as he put it, “I box so my son doesn’t have to.” 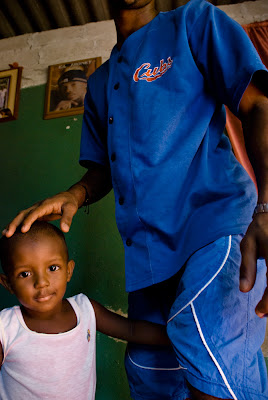 (Henry standing with his one-year-old son)
When these photos were taken, Henry was twenty-four years old, and my own twenty-fourth birthday had passed earlier that year. It made me wonder how two vastly distinct lives can coexist simultaneously in the world. Henry quite literally fights for his survival and I am attempting to document that struggle with a piece of equipment that equaled six months worth of his salary. But I think what I admired most about Henry was that these glaring inequalities never seemed to bother him. He never dwelled on the question “why”, but rather on figuring out the “how.” I remember asking him how he felt waking up to his backyard (which literally looked like a bomb had exploded earlier that day) and located just twenty minutes away is an area akin to the commercial suburbs of the United States. “That’s just the way it is,” he would tell me. “I’m not focused on why they are this way. I’m focused on how I’m getting out of it.”

This is the beauty of boxing. You could never pity a fighter. Despite the horribly impoverished backgrounds fighters often hail from, boxers hardly present an image of weakness. One could see from their intense training regimen that their circumstance is never a consequence of an unwilling laziness to help themselves. Instead, boxing eliminates all possible explanation that inequality is a result of personal agency, but rather that opportunities towards upwards mobility simply aren’t distributed equally. You couldn’t place mercy or feel pity to the poor, suffering (insert third-world developing nationality here) that too often occurs when aid workers try and “fix” the inequalities of the world. They wouldn’t take your pity even if it was offered on a silver platter served with a million-dollar fight contract on the side. There always remained a value in pride, and that prideful integrity brought all the piercing realities of the world straight to your face. That is what I love about the sport.