One week ago marked the longest I've been away home, alone or with somebody. Here on out, its new territory. I have no idea what is going to happen. I "celebrated" by going to the beach, well moreso I succumbed to the urge that I had to do something that everyone was doing being that it was Semana Santa and everyone headed towards the coasts. I had to go to a place where I thought I would fit in only to find out that I don't. The strange thing is that I've been surrounded by people that speak the two languages I'm capable of, yet the person I've talked to the most has been myself. Its funny that I've been tested of my solitude in a place FULL of people, and that so far the worst moments of this journey have been in the most scenically beautiful places, but whats traveling without a little irony?

For the first time I've felt really alone, in a place I'm not supposed to. Also for the first time I've realized there's nothing really wrong with the people I'm around, I'm probably just jealous that they have the capacity to enjoy themselves and I can't seem to find it. Maybe I've had it wrong all along.

However one of the few friends I made, Anita, said something interesting to me the other day. When I told her I've been traveling by myself for the past three months and plan to for many more, she said she looked up to me. Now I'm sure much of that was confused in English being her second language, the connotations differing between the two tongues, but I was taken aback nonetheless. I never considered myself someone anyone would want to emulate, and still don't. But she said she admired my endeavor because I would learn to be happy. She said if you can learn to be happy alone, you will find true happiness; that you can find it anywhere if you find it in yourself.

It reminded me of one of the questions the Bonderman panel asked during my interview. They asked when the last time I was happy. The question caught me off guard because it felt like something a psychiatrist would say to their patient, but after thinking about it, they had been able to see something in me that I couldn't. I could probably count on four hands the number of instances I've been "happy". I'm ultimately an unhappy person probably because I've been looking for it in all the wrong places, unsatisfied with the world and myself, acting in accordance of how I should act rather than how I want to.

But one of things I also said in the Bonderman application was that I believe you grow in struggle, that you learn from pain. After this last week, I hope what I said and still believe in is true. I've had a considerable run of bad luck here, from the Atlantic Ocean swallowing my sandals, leaving me stuck barefoot in the middle of a coral reef full of sea urchins (my feet still have not fully healed), to losing a hefty amount of cash from my moneybelt being flung out of my locker by some unfortunate occurrence of physics. Almost everything has gone wrong for me, up to the last moment of me foolishly locking my keys in my locker and the owner refusing to unlock the spare key because he was too busy chasing female visitors and "fucking sleeping".

Apart from just the shitty things I've had no control over, this place surfaced many of my physical insecurities, has me questioning my self-worth, and forced me to reanalyze my social acceptability. It's been mentally difficult, but in the end I think I've managed to accept my social awkwardness, realized that its okay to be alone, even if everyone else around you isn't.

Costa Rica has left me with a bittersweet taste. Part of the bitterness is due this country slowly being economically overrun by companies, which you can tell from the fact that the majority of the comments on my last post have been from hotel owners and businesses who shamelessly use the comment function as free advertising space. The other part is just the incredible run of bad luck I've been encountering. My only saving grace has been the people I've been running into, the friends I've been blessed enough to have back at home and abroad, and the reminder that people can change the most difficult moments into beautiful memories.

Akey told me that I may be by myself, but I am not alone. He told me that people are always with me whether I am physically with them or not. I still don't think he knows how much I needed that at the time. Despite all the crap that's been thrown at me, that comment allowed to me leave with a smile still on my face. 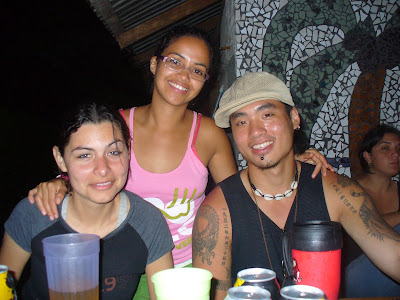 Posted by Wandering Pugilist at 9:19 PM