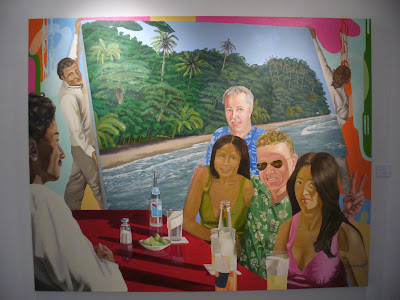 ("The Pure Life o La Pura Vida" by Joaquìn Rodrìguez del Paso)
When you ask about Costa Rica while traveling through Central America, you're likely to hear things like, "Hay mucho desarollo" (there is a lot of development) or, "Es el pais màs rico en Centro America" (it is the richest country in Central America). What they fail to tell you (or maybe they just don't know since it is both expensive and difficult to travel for most Central Americans) is that the "development" is in the form of luxury shops and hotels and most of the "wealth" is in the pockets of foreign business owners.

Coming on the bus from Nicaragua, I immediately noticed the change I was in for. People quite literally wear Hawaiian shirts, more travelers do not, and even refuse to speak Spanish, and you get the sense that people come with an entitlement, like they are the ones coming home, rather than visiting someone else's.

It is like a combination of Las Vegas and Hawaii here, although the type of shit that is legal would make Sin City look tame. I say like Hawaii because the country itself is a natural beauty, 5% of the world's biodiversity as I'm told, but that same beauty ironically attracts its own destruction as rain forest after rain forest is being illegally cut down to make room for condominiums. As the poet Black Ice says, "it's a beautiful world, but ugly souls push the buttons".

Also like Hawaii, its #1 industry is tourism, but you wonder how much gets reinvested into maintaining tourist services and how much actually goes to the people when you see a good amount of people still living under aluminum roofing. 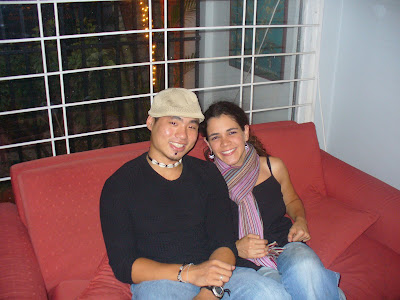 For the first time on my trip I heard Costa Rica referred to as a "poor country", during my conversations with my couchsurfing host Gianna. I tell her that almost everyone around Central America considers it a rich country, that even people from the States consider it a rather pricey tourist destination. She says yes, put in the context of this region, but compared to the rest of the world, it is still a poor country. She asks me why I think that despite the high rises and multinational banks, there are still people begging and starving on the streets, why the government allows the abundance of foreign developers to rape the natural landscape, why the authorities turn a blind eye to child prostitution. I'm left speechless but I know. I know it is because people need money, which gives you an idea of how impoverished the other countries in the region are.

Interestingly enough, despite its rather heavy US influence, Costa Rica is the only country in Central America that hasn't signed onto the Central American Free Trade Agreement (CAFTA). CAFTA is essentially a legislative attempt to open up the trade barriers between Central America and the United States, which means private and government entities will have access to compete for resources and land, which means the ones with power and money will win out, even more so than now. There is of course a strong movement against CAFTA, but Gianna admits she knows the consequences of not signing on. The many private companies that already have a strong foothold will begin to pressure local government, international aid will be cut off, and ultimately people's day-to-day lives will worsen. Sooner or later, the country will have to give in.

THIS is global bullying at work. THIS is neo-colonialism. It is very real. And for what? For the greedy to have a playground to indulge their selfish desires. For those who seem to never be satisfied in having more than enough to have even more. That is it. Nothing else.

Gianna tells me to go to the beach this week, to Puerto Viejo, while I still can. She tells me to go before it becomes another "backyard of the United States", like Jacó is, like what Manuel Antonio is turning into. She tells me to enjoy "La Pura Vida" (The Pure Life), while it can still legitimately be considered the national greeting. I think I will. I'll take a break from my normal cadence of traveling and get to know the country I originally planned to use only as a visa renewal. I might find some beautiful things.

But the fact remains that Costa Rica is a dying country, its natural beauty disappearing before your eyes, or as Gianna describes it, "Like sand running through your fingers". I imagine the hardest part is that you once felt it, you once held it, at one point it was real, but no matter how hard to try to hold on, eventually, it just slips away. 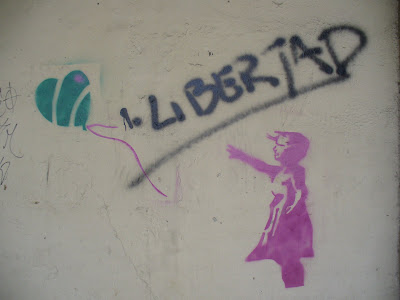 Posted by Wandering Pugilist at 8:10 PM

I just got back from costa rica and felt the same way. What a shame.

Great post Nick. I can totally relate to what you are feeling there right now. I hope you do go to Puerto Viejo. It is one of the two places on this trip that I completely dropped all travel ambition and just spent some time relaxing. Well...and drinking beer.

I stayed at a place called Rocking J's. If you want to meet people and be in the middle of the travler scene that is where to go. It was pretty different then the places I was used to spending my time in, but it was a great break. Enjoy!

She is right about Puerto Viejo. It is very different then the Pacific.

If you come down, be sure and say hi to us at The Banana Azul

Hello ! This blog would be better with a free TV for blogs, no? Visits us: http://www.br-tv-online.com

oh no. that's sad. I was looking forward to visiting costa rica esp.
Mequengue after i saw it on this blog (http://www.CostaRicaHQ.org):(