Jose was his name, or as I always knew him, "mi entrenador" (my trainer). With probably the heaviest coastal accent I've ever heard, most days I never understood the instructions he barked at me while I worked the heavy bag and combinations on the pads were always wrong until I just learned to follow where he positioned the mitts. I didn't even know his name until someone else told me.

He said the boxing federation gave him 2.000 pesos a day for his 2-hour long bus transit, but the rest of his income was dependent on fighters' earnings. His most recent fighter earned a purse of 300.000 pesos. With the standard 10% going to the trainer, that left him 30.000 pesos to split, leaving about $7.50 USD for 3 months worth of work.

He was by far the most dedicated coach I ever met. The only one to show up on Saturdays. From 8AM to 6PM he was at the gym, even ate lunch in the gym and sat around helping whoever needed it; well after all the other paid trainers left to their homes.

We never really spoke until I returned, never really had any sort of casual or deep conversation, but there was always something there. Surprisingly, he was the most excited to see me when I returned to Cartagena, the only one to defend me when one boxer tried to stiff me for some money he owed. He looked after me, always scolded me when I carelessly left valuable items unattended. Maybe because he stuck by that cardinal code of the Sweet Science, that a trainer, always takes care of their fighters. 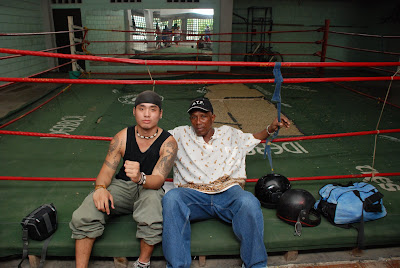 Posted by Wandering Pugilist at 12:10 PM