Travelers say there's something special about Medellín. Something that keeps you here. The people, the climate, the environment. You'll never want to leave.

While I was saying goodbye to some friends at a local beauty salon, I noticed a new barber. He had braids and a very clean cut, so I thought it'd be nice to get myself lined up. Actually, it was more like he noticed me as he immediately approached me and introduced himself. Maybe he could sense we shared a similar style, spoke a similar English dialect, but for whatever reason, I'm glad I met him.

His name was George, or "Bori" as they called him for his upbringing in Puerto Rico. Cutting hair since 13, he lived all over the US, from San Diego, California to Jamaica Queens, New York. He was deported to Medellín after serving four years in prison. He had spent nearly his whole life in the States.

It reminded me of a guy I met in Livingston, Guatemala who caught my attention for speaking English with a New York accent. Arriving without a bit of Spanish, he also was deported to Guatemala two years ago, because apparently he was an "illegal alien", despite the fact he lived all 23 years of his life in New York. "The system doesn't give a fuck about you if you're black" he says. That seems to be true in every country I've been to thusfar.

I asked "Bori" if he liked living in Colombia. "Fuck no," he told me. Apparently three of his friends were gunned down within the last week inside his neighborhood. "It ain't that different from where I'm from but I spent my whole life in the States. That's what I know," he said. It was strange for me to hear that since I'm constantly surrounded by travelers trying to find excuses to stay. I told this to George and he said, "Well shit, if you got money, this place is paradise." I guess Medellín isn't that different afterall. 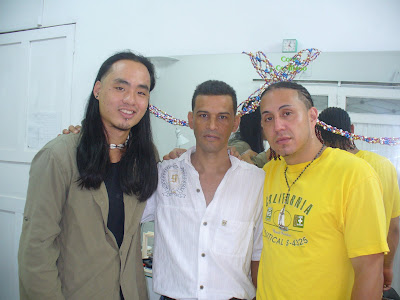 Posted by Wandering Pugilist at 1:32 PM