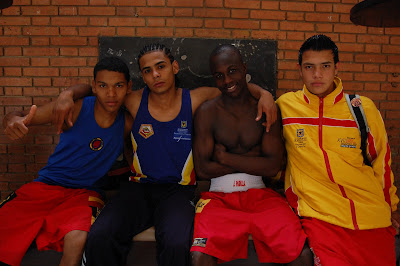 I walked into the boxing gym of Bogotá greeted by stares of curiosity and eventually asked exactly what the hell I was doing there. As I tried to explain my desire to join the gym, an argument erupted between two of the boxers where they wanted, of all things in a boxing gym, to fight each other. At first I was a bit surprised to see the coach not do anything, but looking back on it now, it was probably because he didn't have to.

The fellow fighters kept them apart, at times lifting them in the air, all the while smiling, joking, and laughing so much that it took me a few minutes to realize an altercation had even occurred. At one point they began doing a mock imitation of a bullfight where one fighter would run through the shirt of another, while the rest of them would shout "¡Ole!" You could feel a real bond between them. One boxer later told me "somos los mejores amigos" (we are the best of friends), probably because for some of them, their teammates are all they have here. 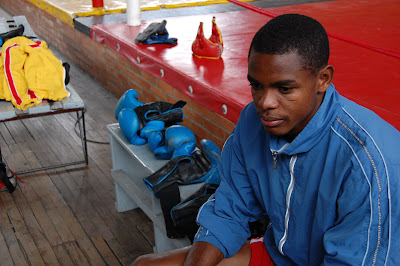 The interesting thing about boxing in Bogotá is that most of the fighters are not from Bogotá. Most come from the impoverished regions of the Atlantic Coast or areas more heavily affected by the country's social turmoil. Many are Afro-Colombian, the race most disproportionately representative of the politically displaced. Almost all have moved here to live in a dormitory of athletes, sometimes a day and a half's worth journey away from their homes, all in search of a less crowded, better funded training facility. When I asked one Afro-Colombian fighter which ones were actually from Bogotá, he said with almost a chuckle, "los blancos" (the white ones). I took his semi-humorous, racially defined response as an invitation to ask if he felt any discrimination here in the capital. As if I had asked whether 2+2=4, he replied "si, claro" (yes, of course), but with the exact same tone said, "no, nunca" (no, never), when I asked if there was any in the gym. Boxing, like many other arts, is like that. To your teammates it doesn't matter what you look like or where you come from. All that matters is what you bring inside that squared circle. 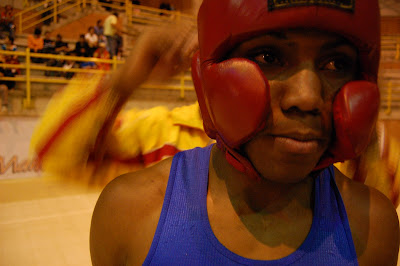 Yet at the same time where you come from does matter. It is usually the motivation to join the gym in the first place, which is why you'll find most gyms packed full of the socially marginalized, the ones society said to forget about. When I asked one fighter what his neighborhood was like, he said, "Esta bien. Hay de todos. Hay bastante inseguridad, ladrones, gamines, viciosos, de todo pues. Pero no. Normal." (It's good. There is everything. There is a lot of insecurity, thieves, street people, drug addicts, well everything. But no. Normal.) He combined the stark contrasts so fluidly, said it so nonchalantly that I just had to simply ask if he considered it dangerous or safe. Being that the last word I said was "safe", he quickly interrupted, "es peligroso" (it is dangerous), to make sure I didn't get the wrong idea. My roommate Andrea told me this was reflective of Colombia's normalization to violence, which I'm guessing is a coping mechanism to help maintain your sanity in such unstable surroundings. But normalcy should not be confused with complacency. I asked the same fighter if he liked living in his neighborhood and with that same dark humorous tone said "aparte que me gusta, me tocan" (apart from whether I like it, they force me). 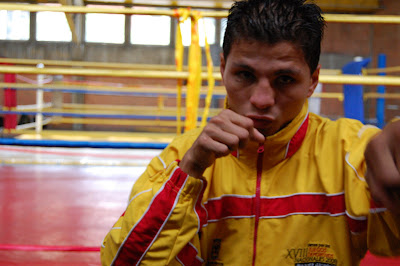 A few days later I spoke with one of the boxers involved in the altercation. The day beforehand he had stormed out of a training session for reasons I couldn't understand due to the language barrier. He just seemed like, what we in the boxing community call, a "hot head". But when I spoke to him he was calm, reserved and articulated with charm. During our conversation he kept using the phrase, "Gracias a boxeo" (Thanks to boxing), like how one would normally say "Gracias a Dios" (Thanks to God). He told me the most difficult part of boxing was being away from your family, which in his case included six months of living inside the gym before a space opened up in the athletic dormitory. He described how "los ratones te quisieron comer" (the rats wanted to eat you), while mimicking a miniature nibbling mouth with his hands. But he said "vale la pena" (it was worth the trouble). Now, "gracias a boxeo", he is able to both study and box, and is currently finishing up his high school requirements. According to him, this is indicative of how the sport is changing, how most fighters' lives change for the better after gloving up.

In the end the two fighters never made up. They never shook hands or made official peace like their teammates had wanted, but at least they were eventually able to walk by each other with nothing more than a threatening glance. The next day they were training side by side, at times even jesting with one another as if nothing had ever happened. And that's exactly what the sweet science does. It takes away some of that aggression from those that have been instilled with so much by their surroundings. It combats some of that painful history that people are just inexplicably born into. But it doesn't cure everything. Sometimes during the minute in between rounds or after training sessions, I see the boxers sitting alone. I notice a recognizable, yet indefinable look on their faces. A look of frustration, of pensive aggression that at times is directed at the wrong people, like teammates, but channeling such emotions peacefully is difficult. In order to do that you'd have to understand why fate chose to give you such a life, understand why the world is unfair to begin with, and of all things, accept it. 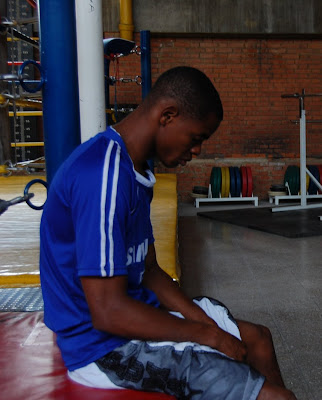 Posted by Wandering Pugilist at 10:40 AM