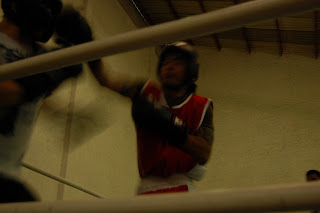 So I think I got tricked into another exhibition match this last weekend. For the past two weeks, I've been training with the local boxing team, well really, what seems to be the only boxing team in the country. I was informed that Saturdays were for sparring, but was immediately confused when they had us put on the traditional red and blue uniforms. Maybe their sparring sessions were just really formal I thought. No. That theory went out the window when they started giving introductions and announcing winners to the preceeding bouts. 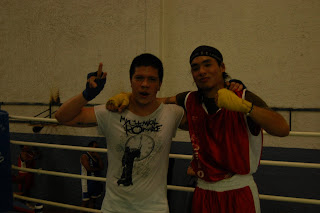 I ended up "sparring" with Federico, a guy who is inconveniently nicknamed "Chino", so everytime someone yelled anything in the ring addressing that moniker, I had no idea who they were talking to. Holding a MFA in sculpture, Federico professes himself to be "the only civilized one here", reminding me you can be of any color and still be pompous, although the five years he spent in London could have attributed to it as well. But when I asked him "why he was boxing", he simply said "because I need it," quite possibly the shortest, yet most complex answer one could give. Regardless of what you think of the fistic trade, boxing means something to people, it gives them hope. 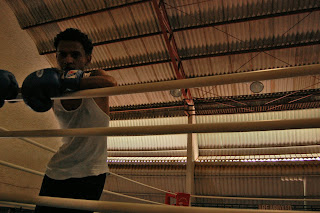 Like twenty-one year old Juan Carlos, aka "Culicho", who with almost an apologetic tone was the first person to tell me he didn't like where he lived. According to him, the abundance of gangs, robberies, and murders eliminated any prospects of opportunity and made him simply wish that "he lived on the other side." Unable to afford school and residing in a scarce job market, boxing is all he does. I'd like to believe that the sweet science is what makes him the nice guy that literally jumps at any opportunity to help me, whether it is finding me a taxi or keeping me dry when it rains. He throws his hooks wide and needs to work his stance, but he shows up everday, working to one day make it pro which he says he thinks about "siempre" (always). 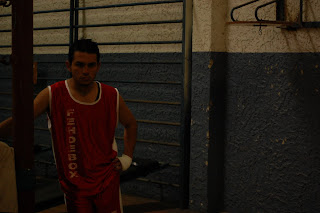 Or like the full-time car painter, Jorge, who honestly fights more with his heart than his head, but is one hell of a body puncher. At nineteen years old, his dreams of becoming a Central American Champion wakes him up to run at 4AM every morning, right before his 9 hr workshift. For him he says its not about the money, he just loves the sport. For him its about the ability for his mother to one day watch a championship fight and say with pride, "Hey, that's my son". He says you can make money in other ways, through work, through studies, but he wants to live his dream, and for him, boxing is it.

Both these pugs have no idea on how they plan to achieve this as Honduras has no professional ranks, in fact boxing here is on life support. But they come anyways because they still hope that the highly unlikely will happen or maybe they know what the sport is doing for them, regardless if they make it pro or not. Maybe they just need the carrot at the end of the stick to justify sacrificing 3 hrs a day, six days a week.

Far from uncivilized I thought, as I was sticking left jabs and pummeling right hand body shots. "Chino" and I fought to a four round draw, an addtional round added, in what I believe he requested to redeem himself from a knockdown I scored at the end of the third. It was due to him being off balance but he went down on a punch, so a knockdown either way. I know it goes against my ethos of being a visitor, but after he had indirectly called the rest of the boxers "uncivilized", I didn't feel that bad. But Federico still made a point. People need boxing. Not to quench a blood thisty attraction to violence or other self-destructive tendencies, but quite the contrary. They come to exercise their desire to get away from them. 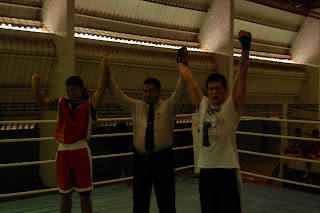 Posted by Wandering Pugilist at 8:56 AM

Hahaha you got suckered into a match and then a draw? Glad you had a good experience. The photos are nice too.

man i miss you bro. i envy the connection you make through boxing: you have to teach me how to box once you're back. keep strong and much love,
v

i love how you take one passion to help portray another passion you have and that's getting to know people and their experiences.