* One of my more recent writing assignments was to recall a past conversation that told led to the moral of a story. This is what came out. Any feedback is appreciated.

“What are you doing here in Colombia?” he asked meekly, fishing for the right answer.

“I’m doing a photo documentary on the lives of boxers. What boxing means to people. How it can change lives,” I stated proudly.

“They call me ‘The Bear’,” he offered, raising his hands and posing in an orthodox stance, urging me to evaluate his form. “I’m a featherweight fighter…maybe you could help me find a fight in the United States”

I paused for a moment. The desperate hope in his dish saucer eyes made me a bit uncomfortable. I didn’t know what to say, I wasn’t here to scout fighters, nor could I really do anything if I found a promising prospect. So I did what anyone does put in an uncomfortable situation. I stalled.

“Well, I’m not really a promoter and…”

“Well maybe you could get me in contact with your promoter.”

“Are there professional fighters in your gym?”

“Well maybe you could ask their promoters.”

“Because I can fight anywhere. I’d be willing to travel. You don’t have to pay me much. I don’t even have to win.”

At this point I’m exhausted, simultaneously empathetic and annoyed. Like any independent traveler, I wanted to be validated for my character, not for the color of my passport. I was, afterall, like him wasn’t I? I was a fighter. I knew what it was like to be punched in the face. Hardship? Yeah I’ve been through some of that myself. I wasn’t privileged. I mean this trip wasn’t all flowers and honey you know. It was tough traveling on your own. You get lonely, you get tired, sometimes you get hungry. I was roughing it. Spending my nights in cramped hostels, intermittent couches and whatever barren floor that could accommodate my sprawled body and cover me from the forces of nature. On top of that, I wasn’t even sightseeing or doing your “typical” backpacker’s journey of drug tourism and partying. I was writing a book, doing something meaningful. Yeah, that’s it. I was doing something to change the world.

But at that moment, the thing I wished to be most was a traveling boxing promoter.

“Ok look. I’m more of a writer than a boxer. I don’t have any connections to promoters. I’m just trying to do a documentary.”

“Are you a journalist then?”

“Okay, really this is something I’m just trying. I don’t really know what I’m doing or where this is going to go so I have no connections. I can’t help you get a fight.”

“Then why are you writing about us?”

At that moment I pause at the realization that those were the exact same words I had squeezed out thirty seconds ago. It was my rehearsed response in case anyone questioned the integrity of my journey, against anyone exposing my ignorance of my intentions, but “The Bear’s” inquiry pierced through it all. What was I doing? Did any of this really change anything?

As he sullenly carried himself back to the heavy bag, I was left with a feeling of anger. It wasn’t that he asked these questions forcefully, in fact they were about as passive as a child asking someone for a candy bar, but I think that was the problem. I felt strange at the fact that a grown adult spoke to me as if I had such authority, as if I had earned this presence of power that he regarded, as if my privilege was something more than merely the unexplained twist of fate of being born in a particular part of the world.

There was such an eagerness in his voice that if I had been an actual promoter, I could have probably made him concede to any ridiculous stipulations I set forth and I became enraged at the realization that this is in fact how boxing works: The stepping-stones of the sport’s superstars are plucked from third-world gyms and paid pennies to risk their lives. I guess I just hated the desperation in his words, hated how the world created and allowed such desperation to exist, that it forced people to sacrifice their dignity for their livelihood.

I was angry at his questions, angry at how it forced me to face the truth. I was a nobody. Absolutely powerless.

So I did the only thing that was in my power. I printed the photos and handed them out to every person I photographed in the gym. Two for each fighter, a tab that still amounted to well over $150.00 USD. In retrospect, a cheap price to wash away the guilt of global inequality, but it was the only thing I felt I could do.

The next day as “The Bear” approached me to claim his photos, I readied myself for the conversation I envisioned:

“Hey, did you take these photos?” he asked.

“Yes I did,” I said resentfully, waiting for yet another plea for a fight.

And in perhaps the most humble and grateful manner, he kindly said to me, “I just want to say thank you, because nobody in Colombia would do this for people like us. So Thank You.”

As he started to walk away, I immediately chased him down and took down his information, told him to repeat to me his weight class, his wins, his losses, telling him I’d see what I could do, see if I could maybe pass on his stats to someone I knew or someone I’d meet. The truth is, there’s really nothing I can do. But I figure that maybe it was better to at least let him think that I was trying, that maybe there existed some hope for him to land that big fight, even if it really was a lie. To this day, I still wonder if I made the right choice. 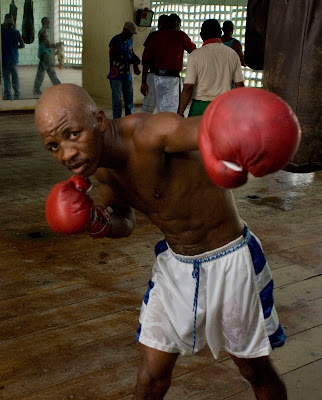 Posted by Wandering Pugilist at 7:31 PM

This made me feel so sad. I hear your frustration and irritation and powerlessness and I remember all the times I felt that combination too. The emotions really come across here.

When I got to the paragraph about handing out the photos, I was a little confused about what was happening. I guess you'd been photographing these fighters journalistically, and you decided to give them printouts as gifts? I had to work that out; it wasn't immediately clear.

Only other suggestion is consider taking out the adverbs and letting other words do the heavy lifting.

Thank you for sharing this.

Thanks for the honest feedback. It means a lot.

I loved this. It was great to see you in this piece and what the interaction was like with the boxers, and what you were feeling on the inside.

I'm with Lisa on the scene with the photos. I got a little lost there, but was able to reorient myself pretty quickly. It was just a bit jarring in the narrative.

In the last paragraph, the line "even if it really was a lie" might leave the reader with a bad feeling, as though you purposely lied. Perhaps this was your intention, but it's good to know nonetheless. It's all about word choice.

I'm happy to see you still working away on this story! I really hope it turns into a longer narrative.

this was a really moving piece. I love the honesty that comes out in it. among all this recent hype around boxing cause of pacman, I'm glad you've shared another side of the sport that I don't think I would have ever thought of or been aware of..