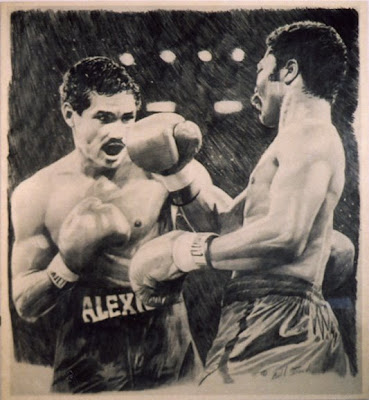 No, couldn't be, I silently thought this morning when a thread on the boxing forum that I frequent caught my eye. "Arguello found dead :(" it read.

Alexis Arguello, aka El Flaco Explosiva, was found dead this morning in his hometown of Managua, Nicaragua. The first thing that popped in my head was how I actually got to meet the former champ last year at his birthday party (we coincidentally have the same birthday). I remember being delightfully surprised at how welcoming this guy was, how approachable and sincere he carried himself and how despite being a damn near superstar in Nicaragua, he was one of the most humble, down-to-earth people I've ever met.

Like most fighters, Arguello lifted his country during a time of civil unrest and social instability. Boxers are individual embodiments of a nation's spirit. Fighters like the Filipino sensation Manny Pacquiao or even the first Peruvian world titlist Kina Malpartida dissolve all the present concerns surrounding the nation when they compete. For that moment, all that matters is their triumph. And even though it may not offer any sort of tangible long-term solution, amidst difficult times, it brings a country an instance of hope, no matter how tiny or short-lived it lasts.

Last year Arguello was elected mayor of Nicaragua. People would call him the "gentleman of the ring", labeled by both national and international observers as one of the classiest fighters to grace the canvas. Today I opened my inbox to a message that said "URGENTE NIKOOOO!!!!". A friend in Nicaragua wrote me about the devastating news, informing me that thousands are filling the streets of Managua, giving their ultimo adios to the champ.

Most news releases about his passing can be found somewhere in the back, mixed in with the miscellaneous press releases as Arguello is virtually an unknown to the international non-boxing observer. But those that have heard of him, mostly know him for his valiant losses to the American fighter Aaron Pryor, but I mainly remember him for what he said to his opponent Ray "Boom Boom" Mancini in his 14th round KO victory. I think his words sum up what kind of person he was.

Posted by Wandering Pugilist at 2:10 PM