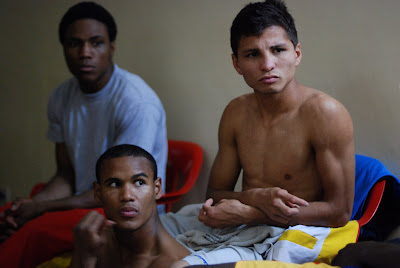 As I was jotting my thoughts down the other night, one of the boxers, Jeyson, asked me if I had another pen. I didn't but I told him he could borrow mine, thinking whatever it was, it would only take a few minutes. With nothing to do, I thought it would be a good idea to shower since we all had to share one between the 11 of us. As I stepped out half-naked in my underwear, the fighters were grouped around in a large circle, much like how one used to do in grade school. After a few awkward seconds and a couple of odd glances, I broke the silence by asking what they were doing. They told me they were discussing the problems with Bogotà's boxing league and were collaboratively composing a letter of their sentiments to the coordinators. They had needed my pen to list the changes they all had agreed upon.

The setting reminded me of my sections in college. Topics were brought up orderly, hands were being raised, all voices and input being heard. Never once did anyone speak out of turn, never once over one another. By the time I finished showering the meeting was over. I went to Cesàr's room and asked what kind of things they had asked for. He said for better accomodations on trips like this one, better equipment (as most of them had to share shoes) but most importantly the opportunity to study.

In Cesàr's case that meant art school, which he had to abandon for work when his father left the family. By the way he talked about art and the smile in his eyes, I would guess he'd much rather do that than work 10 hours a day and endure a 3 hr training session afterwards. Soon after, Jeyson joined us to elaborate on the situation, but before saying anything related to the meeting, he looked at me with a kind face and asked ¿Ya banaste? (Have you already showered?)

Throughout my stay with the team I've been asked a variety of "ya's". ¿Ya dormiste? ¿Ya comiste? (Have you slept? Have you eaten?) If I ever answered "no" to any of these questions, they would quickly scramble to find some recourse for me to receive the same as they had. One boxer, Fiader, used to even invite me to eat lunch back in Bogotà even though I had my own accommodations and it really could have got him in considerable trouble. Apparently during the meeting he brought up the issue of me having to pay for the second leg of my journey, which, to my discomfort, outraged many of them. They told me not to worry, that they were going to handle it for me, but I ended up paying anyways. It came out to about $70 USD for a week's stay, with the trainer only charging me for 5, and in Venezuelan Bolivares rather than Colombian Pesos. I didn't want to cause any of them problems back in Bogotà, and after Jeyson needed to purchase medication for a rumptured eardrum he received in his last bout, I figured it was the least I could do after all the kindness I had received.

Being with these fighters constantly reminds me of the incomprehensible imbalance in this world. Had Cesàr been in the States, perhaps the same circumstances would have passed, but it was his passion that made the difference. His passion represented how many people I've met along this trip that would kill to just have the opportunity to study. And to think in the States, people complain about their course load, stress over what to major in, and student athletes believe they are "forced" to study when others have to hold union meetings to become one. I almost feel a bit shameful when I tell people about my scholarship, embarrassed that there exists a world where one can virtually be paid to travel and I am living in it (although perhaps the catch-22 here is that I would have never realized it if I hadn't been able to travel).

But when I told Jeyson about my journey, he was just, happy for me. It really said something to me, the absence of bitterness that is. Despite my situation being somewhat reflective of the unfairness in the world, for them to just be happy that someone could experience such an opportunity, was well, big of them.

Posted by Wandering Pugilist at 10:55 AM